About the new songs - The First Rebreather

Over the next few weeks, in the run-up to September 3rd, David and I are going to tell the stories behind each song on English Electric Part One. I'm going to kick off with The First Rebreather, which is the opening song on the new album. 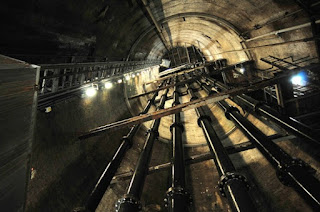 Like many people, I'm fascinated by the world beneath our feet. Many towns and cities in England are riddled with underground passages and chambers (London, Bristol and Exeter being obvious examples) and a number of books have been published on these hidden places. There is also an organisation called Subterranea Britannica dedicated to the study of man-made underground spaces in Britain.

As BBT listeners may know, we have featured one such underground place in a song on The Underfall Yard called Winchester Diver, which tells the true story of diver William Walker who saved Winchester Cathedral by diving under the flooded foundations. The title track of The Underfall Yard also included some references to the world below.

When it came to writing English Electric, I remembered a story that Dave Gregory told me about the making of the Severn railway tunnel. On the basis that there can never be too many prog songs about diving into flooded tunnels I started researching the story and found an article called The First Rebreather which gave me the song's title.

As soon as I've got a good title, the creative juices normally start to flow and so I quickly set about writing the soundtrack and lyrics to the true story of a man called Alexander Lambert who dived heroically into the flooded Severn Tunnel in 1880. The navvies who built the tunnel and who were hard-drinking fearless chaps were terrified that the river would break in and drown them all. However, when the tunnel flooded, the water was found to be fresh rather than tidal. The navvies had, in fact, struck an immense underwater spring which flowed through a fault in the rock (they called it The Great Spring). Conventional diving equipment was used to try to close an iron door in the tunnel to hold the water back. The equipment failed due to the air-hose continually being snagged.

The tunnel engineer had heard of a man called Henry Fleuss who had developed an experimental diving apparatus called a Rebreather (in effect, it was the first aqua-lung.) Fleuss was persuaded to make an attempt on the tunnel but was so frightened that he turned back and said he would not return to the darkness ‘for £10,000 or more.’ The equipment was handed over to Diver Lambert who carried out a number of dives which involved swimming 1000ft up the flooded tunnel in complete darkness. Lambert, The First Rebreather, confronts his fear in the tunnel whilst the workmen await his return.


‘The first rebreather’ is a strange phrase which sounds almost super-heroic which, indeed, Lambert was.  So, I decided that, for the purposes of the song, The First Rebreather would be seen as a sort of superhuman creature come to save the navvies from the Great Spring.
Lambert would, of course, have looked very odd in his diving gear and, to the superstitious men, I’ve imagined that he would have looked like a Mummer (also known as a Souler). Mummers’ plays generally feature a character who brings back to life a dead person, so that fitted quite nicely as Lambert tries to bring air back to the lungs of the tunnel.
In the song, The Great Spring has also become a character. I remember being frightened as a child by the story of Beowulf swimming into the mere to slay the beast and again, I’ve used that imagery. In Beowulf, his men waited by the water for him to return. He returned ‘at the ninth hour’. The closing vocal section of the lyrics is about the workmen waiting for Lambert to swim back to the surface. As The First Rebreather is also a direct follow-up to Winchester Diver, I have also worked in some references to The Divine Comedy.
Musically, The First Rebreather is built, for the most part, on Dave's insistent guitar riff and Andy Tillison's beautiful organ playing. In the choruses and in the Moog solo section we set out some themes which are reprised in different songs later on (and also in songs on Part Two). The First Rebreather also introduces the sound of our string quartet to the album.
The next song we will be featuring in this series of blog posts will be Uncle Jack, which David will be writing about on his blog in a few days' time.


Posted by Gregory Spawton at 7:28 pm

Greg, thanks so much for this. I'd interpreted it as a Tolkien-esque song about battle. Especially his story of the siege of Gondolin in the Book of Lost Tales with the mechanical dragon attacking the sacred city. Wonderful to know what it's actually about.

Here's the passage: “And now came the Monsters across the valley and the white towers of Gondolin reddened before them; but the stoutest were in dread seeing those dragons of fire and those serpents of bronze and iron that fare already about the hill of the city; and they shot unavailing arrows at them. . . . Then the engines and catapults of the king poured darts and boulders and molten metals on those ruthless beasts, and their hollow bellies clanged beneath the buffeting, yet it availed not for they might not be broken, and the fires rolled off them. Then were the topmost opened about their middles, and an innumerable host of the Orcs, the goblins of hatred, poured there from into the breach; and who shall tell of the gleam of their scimitars or the flash of the broad-bladed spears with which they stabbed?” (JRRT, BLT2, 176)