Lydney is an old-fashioned place. When I arrived on Sunday morning for the last day of the festival, I thought I'd walk up to the high street for a quick Costa, but I quickly realised it wasn't that sort of town. So, I drove up to Norchard, where there is a lovingly preserved branch-line station, and had a nice cup of tea whilst sat in an old train carriage.

I enjoyed Abel Ganz and thought Thieves Kitchen were very interesting; they make life hard for themselves with continual changes and twists in their music, so sometimes it's hard to keep up with where each tune is headed, but I really like them. 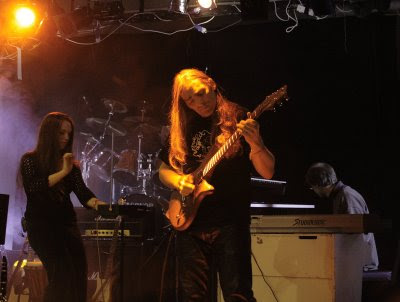 Frost* put on an extraordinarily impressive show; they are a dynamic and powerful band and it suddenly felt like rural Gloucestershire had been invaded by some hot-shot rock stars. But Frost* don't take themselves too seriously; the top-notch musicianship and complicated music is leavened by a Pythonesque sense of humour, and the band seemed to have a great time. 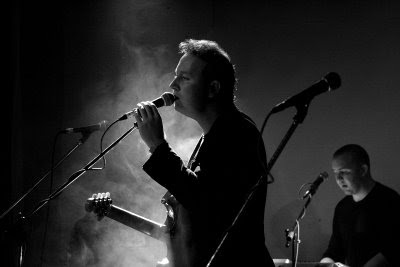 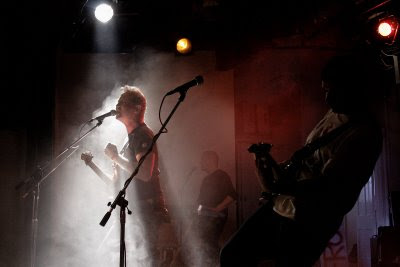 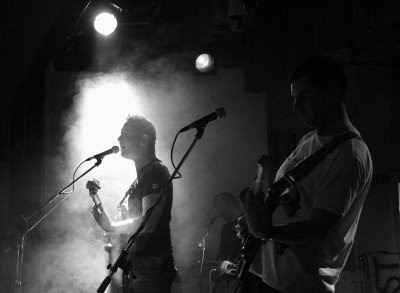 I tried to find somewhere for a meal in the break before The Tangent, but ended up in a pub with a pint of John Smith's and a bag of pork scratchings, which seemed to fit the generally sepia-toned feel of the day.

Thankfully for the slightly progged-out, thinking-about-work-the-next-morning audience, The Tangent came on very promptly and, with Rob Aubrey in charge of mixing (as he was with Frost* and Thieves Kitchen) sounded very strong, despite the number of musicians competing for musical space. Again, there was plenty of spontaneous humour which the crowd enjoyed.
I didn't stay for the whole set but was impressed with what I heard.

I had a nice quick dash home to Bournemouth via the Old Severn Bridge - just a couple of hours on empty roads.

All in all, an excellent festival in an interesting, off-the-beaten-track location. It was good to see some old friends and to hear the diversity on the prog scene. Aside from a few young female Frosties, the audience was predominantly male and middle-aged which makes me wonder, as I always do, about how prog bands can reach a younger audience (difficult unless the band is coming from a heavy rock background such as Opeth, Oceansize, The Mars Volta.)

There was also a worrying tendency for many of the middle-aged men in the audience to wear three-quarter-length trousers. I don't think that's a good idea at all.


Next gig: Sigur Ros in November.
Posted by Gregory Spawton at 2:14 pm 3 comments: 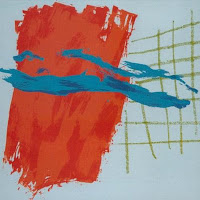 Pre-orders for the English Boy Wonders re-release are now being taken on our website.
The pre-order price is £8 GBP which includes worldwide shipping. All CD's will arrive on or before the release date. From the 1st December the price will be £10 GBP.
English Boy Wonders is being released as a digipack with a 12 page booklet featuring new artwork from Jim Trainer. The CD is almost 80 minutes long and contains a bonus track which was recorded at the time of the original sessions but has been previously unavailable. The bonus track features new keyboard work from Martin Orford.
English Boy Wonders was previously released in a semi-complete state on the GEP label in 1997 and has been unavailable for many years. For the 2008 re-release, we have returned to the original master tapes and have re-recorded much of the album. Additional sections of music have also been recorded to complete the album as it was originally intended. The album has been entirely remixed and remastered by Rob Aubrey (IQ, Spock's Beard, Transatlantic, Pendragon etc.)
We have set up a mini website to provide more information on English Boy Wonders. On the website, you can listen to (or download and keep) three full length songs from the album in high quality audio, read an interview with me about English Boy Wonders and watch a slide show whilst listening to another song from the album.
We know that money is tight at the moment and, even if you don't want to buy, please visit englishboywonders.com and have a listen to the freely available songs.
Other Big Big Train news: We are currently working on a new album for release in 2009. This will be called The Underfall Yard. In 2010, we will be releasing When Everything Was Made of Wood, a retrospective of previously unreleased songs and re-recordings of some of the best songs from our early demos.
Posted by Gregory Spawton at 11:03 pm No comments: