One of many interesting points that Steve Wilson makes is that prog musicians from the classic bands began to suffer from a sort of Stockholm Syndrome, coming to believe that their best music of the 70's was worthless because they were continually told it was rubbish by their captors, the media. This does offer an explanation as to why so many prog musicians ended up dismissing their greatest work, much to the chagrin of fans.

Posted by Gregory Spawton at 6:58 pm No comments: 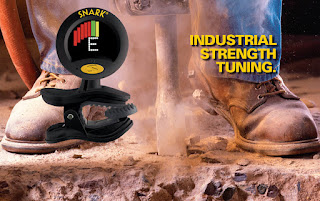 I don't blog about gear very often as it's not really my thing (unlike Andy and Rob, I don't run to the letterbox every month when the postman delivers their subscription copies of Sound-On-Sound and I glaze over very quickly when they get talking about the minutiae of their latest piece of software or kit.)

However, I have discovered an amazing (and very cheap) bit of musical technology which I love so very much that I have to mention it on here.

Forget the wheel and the jet engine; never mind computers and t'internet and all that twaddle, for I now have a Snark.

We were at Regal Lane Studios in Camden a few weeks ago, when we noticed a handy little device being wielded by studio-owner, Ken Brake. It was a tuner. It had a clamp for attaching to an instrument. It could tune by vibration or microphone. It had a dial like a rev counter on a fast car. It glistened in the studio lights. It looked a bit like a character in a Pixar movie. It was called Snark.

We now have our own Snark and it is a wonderful thing. We were recording some 12-string last week for a song called Judas Unrepentant. Now, I love a bit of 12-string but they are fussy and frustrating instruments that require continual tuning-checks. However, with a Snark clamped to the headstock, staring at me with its turbo-charged eye, it was a breeze.