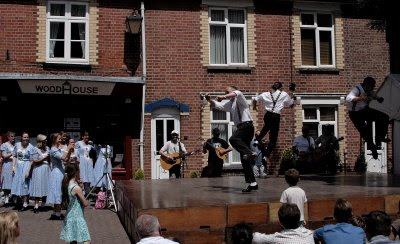 Driving into Wimborne for our Saturday morning bacon sandwich, we stumbled, by accident, upon the town's annual folk festival, held under a glorious sunlit sky.

If anyone doubted that folk is overcoming the negative coverage it gets as the music of choice of middle-aged, sandal-wearing bearded-types*, then Wimborne, this weekend, would have convinced them that times have changed: folk is now cool.

What we found in this small Dorset market town was a thriving sub-culture which revelled in its eccentricity. Men, women and children wandered around wearing morris and mummer outfits which went way beyond quirky. Alternative types could be seen enjoying the music and dance alongside the gentryfolk of Dorset.

We also found an abundance of musical ability and an overwhelming sense of joy. In short, it was a brilliant experience. 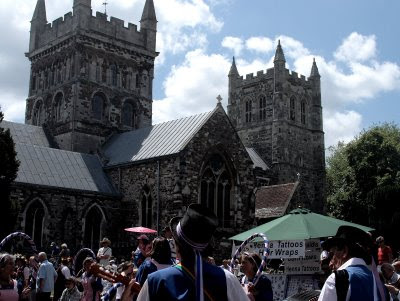 * The morris dancer is often perceived as the pejorative folk archetype. But even here, things have changed. Many of the younger morris dancers have an almost goth-like image. It seems that they have passed over to the dark side.
Posted by Gregory Spawton at 4:36 pm No comments: 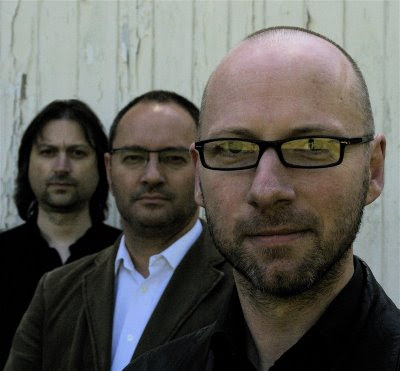 Last week we spent some time at Aubitt Studios recording vocal, flute and mandolin parts for The Underfall Yard. This was the first time that David has recorded with Big Big Train and I am pleased to report that we had two brilliant days. The sessions were incredibly productive and we had an absolute blast.

We started with Winchester Diver before tackling the rather formidable 23 minutes of the album's title track (a song which Rob thinks will be his biggest ever mixing project.) We finished the sessions with The End of the Line. That leaves just two more songs to do to complete recording on the album (we also have two additional non-album tracks to finish off.)

Martin Orford joined us for a celebratory curry at the close of recording on day one. Martin had spent the day on the footplate of an engine on the Mid-Hants preserved railway line and seems to have no regrets at all about leaving the music business (although I did catch him reading the IQ article in Prog magazine, and we are hoping to lure him out of retirement for a solo or two in the future.)

As well as the recording sessions, we also took part in the first photo shoot of the new BBT line-up (more pics on our Flickr page.)

Finally, I had the pleasure of meeting Simon and Paul from Tinyfish who are working with Rob on the mix of their first DVD. From what I saw and heard, the DVD is going to be a cracker.

Some video footage of The Underfall Yard vocal sessions will be online soon.
Posted by Gregory Spawton at 6:56 pm 3 comments: