In the Cage at Abbey Road 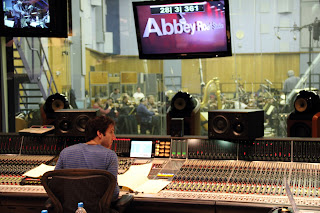 Many thanks to Mark Hornsby who allowed us to sit in on a session at Abbey Road last week. The session was memorable for a number of reasons; firstly, simply because it was at Abbey Road; secondly it involved recording a full 48-piece orchestra, which isn't something you get to see every day; thirdly, because the orchestra were recording versions of In the Cage and Kevin Gilbert's beautiful A Long Day's Life.
The recordings were for future re-issues of Nick D'Virgilio's Rewiring Genesis and Kevin Gilbert's The Shaming of the True.

Studio One is the largest recording space in Abbey Road and has been used for many film scores (including the Lord of the Rings). I assumed we'd spend most of the time in the control room (the picture above is from the control room of Studio One looking out into the recording room) but we were able to wander in and watch the orchestra in action (mobile phones turned off, of course, the mere thought of my phone ringing during the middle of a take was almost too much to bear.)

So, we were 'up close' as the players turned over the score for the first time and began warming up and practising the tricky bits. 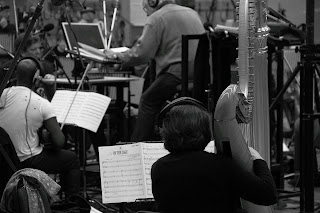 Within a few minutes the orchestra tried a run-through of the first track, In the Cage, to sort out any teething problems. It was a spine-tingling moment when the 'pulse' at the start of the song began and the opening chords drifted in. The arrangement was absolutely beautiful; faithful to the original but using the full scope of the orchestra to enhance the composition. 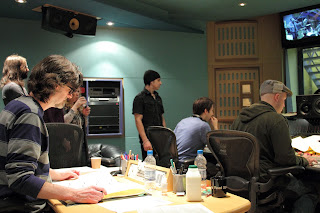 Banks' keyboard solo was played, for the most part, by the 20 violinists (they took it in their stride; all of the musicians were from London's top orchestras). The last flurry of notes from the solo was played on brass instruments and this proved a particularly challenging section. 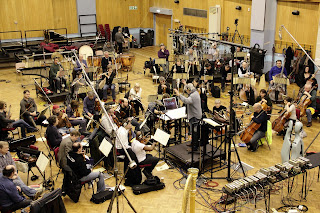 After a couple more complete run-throughs, In the Cage was pretty much in the can. There was time to focus on two or three of the more difficult sections and these were recorded in short takes just to ensure that everything was as it should be.
Next up was A Long Day's Life. Two separate versions were recorded and, again, the arrangements and performances were simply stunning.
During breaks in the session, we were able to pop into Studio Two (where most of The Beatles albums were done) and Studio Three (this was Pink Floyd's main recording studio.)

We were also pleased to find out that the Pro-Tools operator for Mark's session had recorded Sigur Ros' Ara Batur from the Með suð í eyrum við spilum endalaust album. This was a huge session involving the band plus the London Sinfionietta and the London Oratory Boys Choir.

Prior to recording Ara Batur, Sigur Ros had tuned up un-announced to have a look around the studios. I understand their response to seeing the various recording rooms was, like ours, one of awe.

Regular readers of this blog will know that I'm a bit of a history buff, and Abbey Road elicits the same feelings as any of the major historic buildings in England. We walk into the rooms and we look up and we wonder: 'what have these walls seen?'
Posted by Gregory Spawton at 1:54 pm 7 comments: