David Longdon has joined the blogosphere, so we are now a two blogs band. As well as BBT stuff, David will also be talking about his solo career and, like all good bloggers, will share his thoughts on life as he finds it.

You can read his blog here.
Posted by Gregory Spawton at 1:59 pm 1 comment:

The success of Classic Prog

I was chatting to Classic Prog earlier today about our future plans 'n' stuff and I asked, with some trepidation, how well the mag was doing. It would seem that it is doing very well indeed.

Classic Prog is selling around 25,000 copies per issue now, which I think is bloody impressive for a specialist music magazine.

Long may it prosper.
Posted by Gregory Spawton at 6:48 pm 1 comment:

We're hard at work on an EP for release later this year, prior to the completion of the next album, English Electric.

More news on the EP later, but in the meantime, here is an excerpt from one of the songs on the EP, Fat Billy Shouts Mine. It's a sad tale about a footballer called William 'Fatty' Foulke, a goalkeeper from the late 19th and early 20th centuries.

The excerpt isn't mixed or nuffink, so it's a bit rough and ready, but you'll get the general idea.

The fiery Moog Voyager solo is from Martin Orford.
Posted by Gregory Spawton at 8:32 pm 3 comments: 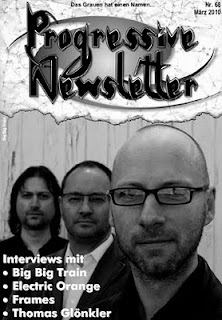 There's a big interview with us in the new issue of German-language magazine Progressive Newsletter. Excerpts from the interview (in English) can be found here.
Posted by Gregory Spawton at 4:24 pm No comments: