Jason Warburg, editor of The Daily Vault (one of the oldest and most well-established review sites on the web) has just announced that The Underfall Yard is his independent album of the year.

Jason's eloquent review of The Underfall Yard is here .
Posted by Gregory Spawton at 7:48 pm 3 comments:

Stocks have been running low of the Gathering Speed and The Difference Machine CD's and rather than re-order a fresh supply of the existing jewel-case CD's, we've decided to give them a makeover.

Gathering Speed will shortly be re-issued as a digipack with an 8 page poster booklet featuring previously unseen artwork and including, for the first time, the lyrics. The album has also been remastered by Rob Aubrey. The Difference Machine will be re-issued in January as a digipack, again with previously unreleased artwork.

The Difference Machine re-issue will also feature an additional track called Hope You Made It*. This song was part of the concept for the album and was recorded during The Difference Machine sessions. However, its inclusion took the album to around the 60 minute mark and we were looking for a tighter track-listing so decided to leave it off the original album.

Finally, we were looking to re-issue a re-mastered version of our first album, Goodbye to the Age of Steam, as an iTunes-only release in 2010. However, Rob Aubrey has kindly agreed to completely re-mix the original album from the master tapes so the re-issue will be of the highest possible quality. I'm not sure yet whether we'll do a limited pressing of Age of Steam or just go with the download-only version; we'll have a think about that in the next few weeks.

Anyway, the smell of mulled-wine is luring us to the kitchen, so we would just like to take this opportunity to wish all of the readers of this blog a very Merry Christmas and to thank you for your support.

* If anyone has the original version of the album and is keen to have the unreleased track without having to buy the CD again, please e-mail us at bigbigtrain@hotmail.co.uk and, when the album is re-issued, we will send you a link to a free downloadable version of the song in CD quality.
Posted by Gregory Spawton at 1:18 pm 5 comments:

We've been nominated for the top prog album of the year on USA Progressive Music, so if anyone wants to vote for us (or, indeed, any of the other albums on the list) please check the shortlist out. I doubt we'll get very far because the album has been released so late in the year and therefore will have had less reach than the others, but it would be good to pick up a few votes.
Posted by Gregory Spawton at 6:01 pm 2 comments:

I am very pleased to announce that David 'Wilf' Elliott's latest radio show in The European Perspective series is devoted entirely to Big Big Train and The Underfall Yard.

The European Perspective is an unmissable progressive rock show which is broadcast every week on The Dividing Line website. The show can be streamed or downloaded from The Dividing Line (the last four episodes are hosted on the site so The Underfall Yard episode will be online there for the next month.)

However, David Elliott has also kindly made available a permanent link to the show here.

The podcast is in four parts:
Here are the specific details about the show from the Dividing Line website:

'This week the European Perspective is given over entirely to a celebration of this uniquely English band. Starting with a look at some of the music from the albums that the band themselves say "made Big Big Train", we then talk to Greg and Andy about the evolution and future for Big Big Train, and then to David Longdon, their new vocalist. Finally The Underfall Yard gets an airing, in its entirety, with a commentary from Messrs. Spawton and Poole.

◦Genesis - Dancing with The Moonlit Knight from Selling England By The Pound, 1973

◦XTC - The Ballad Of Peter Pumpkinhead from Nonsuch, 1992

◦Wind Distorted Pioneers from Goodbye To The Age Of Steam, 1994

◦Summer's Lease from The Difference Machine, 2007

◦David Longdon - On To The Headland from Wild River, 2004

The Underfall Yard, with commentary from Greg Spawton and Andy Poole:

◦Hope This Finds You (from The Difference Machine)

◦The Underfall Yard'
Posted by Gregory Spawton at 10:41 pm 3 comments:

All pre-orders are on their way

All pre-orders made up to 10th December are now on their way and, provided there are no postage problems, should arrive on or before release date. We will continue to post new orders within two days of purchase.

If you have any concerns about your order please e-mail us on bigbigtrain@hotmail.co.uk and we'll sort any issues out.
Posted by Gregory Spawton at 4:17 pm 2 comments:

The Band of the Coldstream Guards' new album, Heroes, featuring two of the intrepid Big Big Train brass players and heartily recommended by me in an earlier post, has now entered the upper reaches of the charts.

This article in the Daily Telegraph explores the attraction of the album to men of a certain age. Colour Sergeant David Desmond, who was responsible for the beautiful brass arrangements on The Underfall Yard, manages to find the perfect Black Adder quote for the article.
Posted by Gregory Spawton at 3:17 pm No comments:

There are quite a few interviews and articles due to be published about Big Big Train in the next few weeks (plus an in-depth podcast on the band - more news on this later.)

One of the first of the interviews is online now on the Caerllysi music site (Caerllysi are specialist dealers in progressive music.)
Posted by Gregory Spawton at 11:42 pm No comments:

Just one week to go

The Underfall Yard will be released on 15th December. That means there is just one week to go to buy the album at the introductory price of just £8 (which includes worldwide shipping.) Pre-orders will ship to arrive on or just before the release date.

From the 15th December, the price will increase, although we'll try to keep the rise as low as we can as we know that money is tight at the moment.

Our secure online shop can be found at our homepage here. The first track on The Underfall Yard, Evening Star, can currently be heard on the music player on the homepage (replacing Winchester Diver) and the full free download of the 23 minute title track also remains available there for a limited time.
Posted by Gregory Spawton at 6:06 pm 3 comments:

The Band of the Coldstream Guards 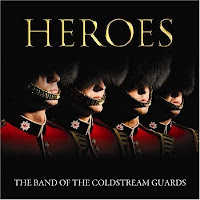 Two of the brass players from The Underfall Yard, Dave Desmond (trombone) and Nick Stones (french horn) are members of the Band of the Coldstream Guards* and feature on a new album called Heroes.  My copy has just arrived and it's already one of my favourite albums of the year, with the right mix of rousing tunes (eg Ron Goodwin's glorious 633 Squadron and Eric Coates' Dambusters) and adagio-style pieces (eg Nimrod, I Vow to Thee My Country).