The Resurgence of Prog

Interesting new article on prog in The Guardian. Read it here.
Posted by Gregory Spawton at 2:14 pm 1 comment:

In search of vintage sounds 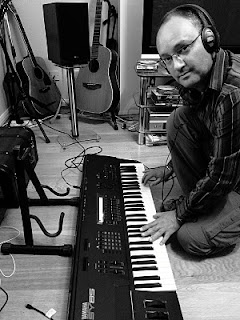 Andy, firing up the Quattro
We've been struggling to replicate a couple of the keyboard sounds we used on Age of Steam and had decided we just had to accept the use of substitute sounds in one or two places.Then we found out that Martin Orford (who co-produced Age of Steam) was selling some of his gear. To our surprise, the list of items for sale included the Yamaha SY85 which he had brought in to the studio and used on the album back in 1994. It was this keyboard which had generated the missing sounds. So now we have access to them again. 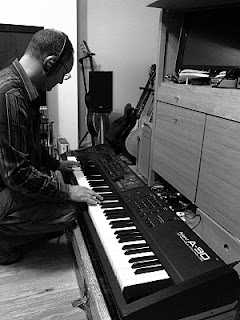 So many notes to choose from...
The list of items for sale also included Martin's Roland A-90 which was his main stage keyboard for many years, and we've taken the opportunity to try that out with a view to buying it. We've not owned an 88-note keyboard before and it is an impressively massive beast which is unlikely to be popular with roadies.

It's been fun firing up these vintage keyboards (especially as many of Widge's live patches are still in evidence) and as long as we can get the midi working on the A-90, I think we'll be buying it.
Posted by Gregory Spawton at 6:17 pm No comments:

Popped into Aubitt studios the other night for a chat with Rob and Mike Holmes, who are finishing off the new The Lens album.

The Lens was the immediate antecedent of IQ (which was formed out of the ashes of The Lens in the early 1980's.) When I heard that Mike was revisiting The Lens I was slightly sceptical; I wasn't sure what the point of it would be.

I was wrong to be unsure. Mike played us three of the tracks from the forthcoming album and they sounded absolutely brilliant. There were shades of Camel, Pink Floyd, Hawkwind (and, of course, IQ) in a setting of  contemporary sounds and with an almost Trance feel at times. It has been beautifully recorded as well.

I'm not sure when The Lens album will be released, but do check it out.
Posted by Gregory Spawton at 8:30 pm 1 comment: