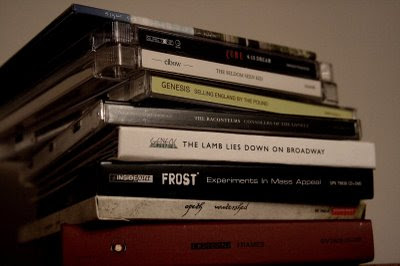 In no particular order, here are my faves of 2008:

The Cure
Robert Smith's miserabilists are back with a beautiful album; the right balance of intense, brooding epics and jangly pop. The Cure have been a big influence on Big Big Train, especially on English Boy Wonders.

Oceansize, Frames
I know this one was originally released in 2007, but the special edition was released in May 2008, so I'm not cheating in including it this year. And besides, it took me a long time to fully appreciate the album, which is a huge thing; complex, involving, beautiful music with superb melodies and a mighty sound. The special edition features a filmed performance of the album.

Sigur Ros, With a Buzz in Our Ears...
Not my favourite of their albums (too bouncy for my taste) but enough moments of glacial majesty to make it one of the best of the year. Their DVD, also released this year, has been acclaimed by MOJO as the best DVD of 2008. It is a film of astonishing beauty and a great introduction to Sigur Ros.

Elbow, The Seldom Seen Kid
The fourth brilliant album from the melancholy Northerners. Contains the best musical moment of 2008 in the Loneliness of a Tower Crane Driver, as the chords shift underneath the 'send up a prayer in my name' line.

Opeth, Watershed
Never thought I'd get into a band with death-metal vocals but Opeth are a group to be treasured, with genuine crossover appeal and heroic drumming. Another band in a similar genre which is worth a mention is one of my daughter's favourites - Draconian, from Sweden. On their album Turning Season Within, they make death-metal vocals sound very moving, and they write great songs. And while I'm talking about the heavier side of things, I can't wait to hear the new Mastodon album, due next year. Another frenzied metal band with a great drummer (who is heavily influenced by Phil Collins), Mastodon are going prog in 2009.

Frost*, Experiments in Mass Appeal
Frost* experiment with the prog format on EIMA, packing a lot of twists and changes into shorter tunes. It's a cracking album, with punchy songs interspersed with melancholy piano-led interludes. The standout track for me is Secret Song which closes the album in stunning fashion.

Genesis - Selling England By the Pound and The Lamb Lies Down on Broadway.
These re-issues were the most eagerly-awaited releases of the year for me (in fact, of the last five years - it's been a long wait since the remix of The Lamb was first announced.) The box set as a whole is an important release with superb extras including lengthy interviews and the legendary Jackson Tapes. But the main draw is the 5.1 remixes of the classic Genesis albums showing the evolution of the definitive prog band. In truth, some of the songs on Trespass, Nursery Cryme and Foxtrot are now sounding a little like period pieces, but when they fully hit their stride on Selling England and The Lamb, they were a band of unbelievable creativity and power. These two albums contain material of jaw-dropping quality and they sound as contemporary today as they did in the 70's. We were lucky enough to spend an evening with Nick Davis recently and he kindly spent a few hours answering my incessant questions about his work with Genesis and XTC. Nick's favourite Genesis album from his days as a fan was Selling England and to get the chance to open up this box of jewels and polish them until they gleam...wow, what a thing to have done. Nick starts work on remixing the live recordings in January.

Finally, whilst I'm on Genesis, I should also mention this year's splendid re-issues of Anthony Phillips' The Geese and the Ghost and Wise After the Event. These are essential purchases for Genesis fans and they include comprehensive sleeve notes and bonus tracks. We've worked up a cover version of one of the demos (a previously unreleased song called Master of Time) which we'll be releasing as a free download in 2009.

I'm sure I've forgotten a few other releases that I've enjoyed in 2008, but these are the ones that spring to mind. Have a great Christmas and a Happy New Year.