Outside, the sun is shining and the girls are looking ever more beautiful in their summer dresses. There is tennis, football and motor racing; there are music festivals, the beach, barbecues and beer. And yet we find ourselves staring, once again, at the walls of an airless recording studio, trying to nurse a number of different projects to completion.

In the last few years, a regular schedule of releases has enabled us to get noticed and build momentum. The new albums and reworked or remastered reissues have all done well for us in continuing to build an audience. In short, we need to keep working hard, as a lengthy gap between releases is not a good option for us.

So, work hard we must. We're 95% there with the Goodbye to the Age of Steam remix. And we're about three-quarters done with the new Far Skies Deep Time EP, too, with vocal sessions booked in for July and mixing in August. Both of those CD's will be fully completed by the end of the summer and should be out in the autumn.

Yesterday, we restarted work on the English Electric album, opening up sessions that we hadn't touched for a few months as we need to get them ready for drum recording in the winter. These sessions contain about 70 minutes of new songs and there is a huge pile of work to do on them to get them ready in time. Some of the songs are fairly complete, others more sketched out. We opened up two yesterday for a careful listen, one called East Coast Racer and another called Worked Out. Both of them sounded like they were full of  potential. It's the process of unlocking that potential that we need to crack on with.

In addition to Age of Steam, Far Skies and English Electric, David is developing ideas for our most ambitious project yet, which we'll aim to complete after English Electric in 2012 or 2013. This new project is shaping up to be a mighty piece of work.

So there is much going on at the moment, enough to keep us busy for some time to come.

And I am also conscious that we have had a number of amazing offers for gigs and festivals, so much so that we need to start thinking about whether we can afford to take some time out from our recording schedule to take up some of those offers. For now, recording and releasing music seems to be the way to build the band, but at some stage a change in tack may be necessary to take things to the next level. And it could be fun, too.
Posted by Gregory Spawton at 7:33 pm 2 comments:

'Crap! That was loud' 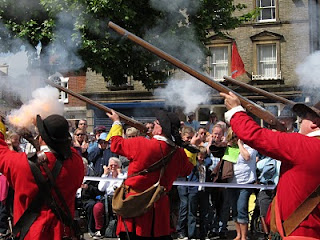 Another fabulous weekend at the folk festival. Looks like the musket-fire during the parade may have been a tad loud for the good burghers of Wimborne, though.
Posted by Gregory Spawton at 6:53 pm No comments: