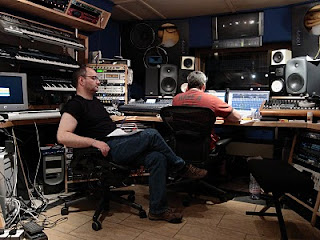 Sadly, technical gremlins got in the way of the planned completion yesterday of the remix for the re-release of our first album, Goodbye to the Age of Steam. Rob ('you're paying me less than the minimum wage for this') Aubrey and Andy worked on until the early hours, but were unable to get it finished. Still, significant progress was made and we should be able to get things tied up with one more session.
We've suddenly found ourselves with a whole heap of work to complete in the next few months. In addition to the Age of Steam remix, we need to finish off recording and mixing the Far Skies Deep Time EP that we're planning for an autumn release. The EP should come in at 40 minutes plus, so some might call it an album, but for us it's a (rather substantial) hors d'oeuvres (...betcha didn't know I could speak French...) before the release of the English Electric album, which is due in 2011.
And that's the other huge piece of work we need to do, because Nick D'Virgilio is due in England in the winter months and we need to get the whole of the album far enough along to record the
drum sessions while he's here. So, there is much to keep us occupied.
As I'm writing this, I'm listening to the Age of Steam mixes we have completed. And mighty fine they are sounding, too. As my tweeting suggested yesterday, Age of Steam is a bit of a period piece as we were using many of the keyboard sounds which were fashionable in the early 1990's. By the time we got to 1997's English Boy Wonders, we had stripped things back mostly to guitar, organ and Mellotron, so the 2007 remix for that album allowed us to use the much improved samples of those instruments which are now available.
For Age of Steam, though, we used a lot of sounds which lock the album into a more specific time frame. One of the decisions we had to take at the start of the remix was whether we should replace those sounds with something we might have used if we were making the album today.
After a bit of soul-searching we decided that we would stick to the orginal sound canvas for the album. This was a challenge in itself, as we no longer own the keyboards that we used back in 1994. And many of the keyboard parts for the album were not on the original 2 inch tapes, so we've had to recreate them using sounds which are as close to the original ones as possible.
As well as a full remix of the original album, the Age of Steam re-release will feature a couple of bonus tracks. One of these is an extended version of Losing Your Way including a section of music we decided not to use on the album version. The other bonus track is a mashup of the two instrumental tracks on the album recorded by the Big Big Train of 2010 (featuring David on flute and keyboards and Nick on drums.) And of course, we use our current palate of sounds and tastes, so it is possible to get a very direct idea of
how we've changed over the years.
Finally, the new Age of Steam will also feature some beautiful new cover and booklet artwork by Jim Trainer. The original cover painting by Kev Thompson has been lost, so we've asked Jim to do some new artwork and he's turned in a magnificent set of images.
More news on Age of Steam when we have a release date.
Posted by Gregory Spawton at 6:08 pm 2 comments: 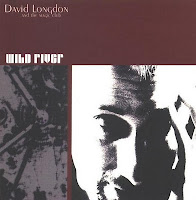 Wild River was recorded before David joined Big Big Train during a period of change (from one century to another). David Longon: "My old life was changing into an exciting/terrifying period in which I wondered what my new life would be like. The album is about the passing of time, love, death and the inevitable impermanence of everything. It is not a Prog album but it has elements of progressive rock within it. It's an eclectic mix and I had an interesting journey making it".

Here is a photo from a recent BBT photoshoot on the glorious SS Great Britain in Bristol. 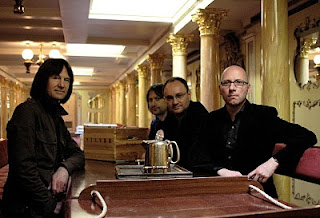 Why is the band called Big Big Train? We still get asked that question, and the answers I've given over the years haven't always been consistent. In the early days, we were slightly embarrassed about admitting to showing too much of an interest in railways as we were frightened of being labelled as train-spotters, so we hid away from the obvious context. In more recent years, I've learned not to care.

The truth is, I like trains, dammit. I like railway stations and lines and all of the associated paraphernalia.

It's in the blood, you see. My grandad was a railway men and my mum was brought up in a railway cottage, a stone-throw from the line and a few paces from the engine sheds at Leicester yard, where her dad, a wheeltapper, spent all of his working life.

The picture below is of the yard (the Leicester Midland Locomotive Depot) and was taken just after the second world war. My mum lived in one of the terraced houses to the immediate left of the huge circular engine shed. She lived there for all of her childhood, only leaving in the late 1950's, when she got married. 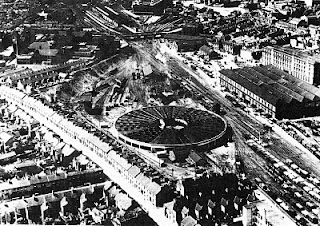 Last weekend we took Mum back to the East Midland town of Leicester to revisit her past.

Whether you think large-scale immigration is a good or a bad thing or have no particular view on the subject, it is not a controversial point to observe that inward migration has brought major change to this part of Leicester which, in community terms, is now an area where madrassas, mosques and halal butchers have replaced the corner shops and churches familiar to my mum's generation.

The landscape has changed as well. Some of the terraces have been demolished (including my grandad's old house) and replaced by flats and industrial units, although enough of the old houses survive to get a feel for the area as it was. And many other things have also remained the same. The Royal Mail sorting office where one of my uncles worked is still a postal depot. Mum's girls' school has changed its name but not its function; the park she played in and walked across to get to the school is still there and still beautifully kept.

And down on the railway, whilst the engine sheds have gone, the sidings remain, although silent now; the rails are rusting and grass-grown and there are no engines any more. 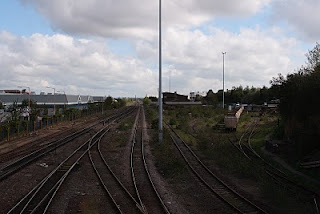 Leicester yard in 2010, view taken from the bridge shown at the top of the previous picture. Mum's house would have been on the right of this picture, behind the trees

As we left the area, we stopped at a crossing for a little girl, maybe 7 or 8 years old. Her face lit up as she ran headlong across the road to the safety of the pavement. She may well have been on her way to play in the park. A half a century ago, that little girl could have been my mum.
Posted by Gregory Spawton at 4:01 pm 3 comments: