We're getting close to completing recording work on English Electric after three more very productive days at Aubitt studios in Southampton. We recorded drums for The Permanent Way, Judas Unrepentant and Worked Out and vocals for Judas Unrepentant, Worked Out and The East Prospect of Winchester From St Giles' Hill. We also had time to record drums for some tracks for Station Masters, including Make Some Noise and new versions of Fighter Command and Summer's Lease.

There are more photos from the studio on our Facebook group page. 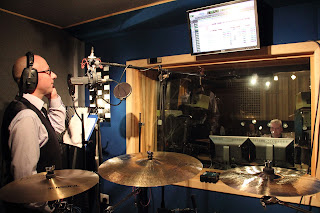 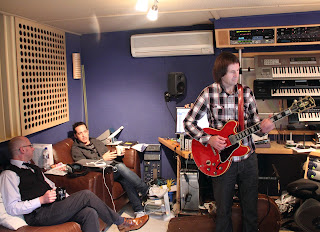 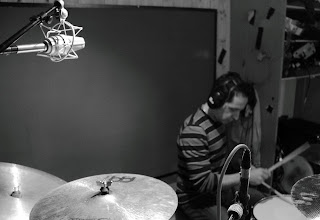 I thought I'd do a quick round-up of the releases I've enjoyed during 2011.

The finest new album I've heard this year is Elbow's Build a Rocket Boys! It's a CD of subtle and beautifully-constructed anthems, best enjoyed, I'm sure, whilst drinking a glass of the accompanying beer. Runner-up to Build a Rocket Boys! was probably Last by The Unthanks.

I've not owned a Steve Wilson / Porcupine Tree CD before but finally caved in and bought Grace For Drowning. Initially, I found it a bit light on songs with perhaps too much 'noodling', but after several listens the songs began to reveal themselves. Now I think it's probably the best out-and-out prog album I've heard for many years.

In the last few weeks I've been listening to 50 Words For Snow by Kate Bush. I've not spent enough time with it to reach a conclusion, but I suspect that two of the songs (Snowflake and Misty) are as good as anything she has ever done. And speaking of established artists who can still surprise, the best song of the year was, by a long way, the new version of San Jacinto on Peter Gabriel's orchestral album, New Blood. The album as a whole is a curate's egg, but San Jacinto is simply breathtaking and features a jaw-dropping vocal performance. It includes several moments of astonishing beauty and I urge anyone who hasn't heard it to listen to it on a good system or on good headphones.

I've read a lot of books this year, but very few have stayed long in the memory. The best was probably Edgelands by Michael Symmons Roberts and Paul Farley. However, judging from the presents under our tree, I will have a fair few books for Christmas so may find a gem amongst those (possibly Max Hastings' All Hell Let Loose or The Great Sea by David Abulafia , both of which have received high praise.)

I haven't seen many new films in 2011 and none of the ones I've seen were anything other than mildy entertaining (maybe I've just chosen badly, or maybe the cinema is too expensive these days.) However, there have been a number of brilliant tv series which suggests to me that some of the best film-making is now for the small screen.

Two of my favourite comedies have been the very clever and elegantly-written American show Bored To Death (which has sadly just been cancelled) and an English series called Rev which is about an inner-city vicar and his parishioners. Rev is both very funny and intensely moving. It seeks out and finds the good in all of the characters, no matter how unsympathetic they may appear.

And alongside the comedy, there has been great drama too. I'm a big fan of George RR Martin's Game of Thrones novels and was delighted that the HBO series was such a strong piece of work. Series 2 is eagerly anticipated in the Spawton household (my son plunged headlong into the books as soon as series 1 came to an end; it's good to see a teenage boy read thousands of pages of high-quality fiction with such evident pleasure.)

Another drama series which reached for the sky was The Walking Dead. On the surface, it's a well-made and sometimes very scary horror series. However, season 2 has also explored some deeply moral issues and the fascism which is beginning to emerge amongst some of the desperate characters is as frightening as the zombies.

The final two programmes I'd like to mention are both crime dramas. I'm not into crime as a genre, so these two took me by surprise. I really didn't think I'd spend 30 hours watching the Danish drama The Killing, for example, but I was quickly hooked. Better still, though, was the Italian series Romanzo Criminale which was tucked away on an Arts channel. Romanzo Criminale tells the true story of a gang of deeply unpleasant criminals who 'take' Rome in the 70's and 80's. It's complex, gripping stuff and the casting is brilliant with a bunch of actors showing extraordinary on-screen presence.

As I say, the characters in Romanzo Criminale are not at all sympathetic (even the Rev Adam Smallbone would struggle to find the good in these guys) but there is something magnetic about this unholy band of brothers (Libano, Freddo, Buffalo, Dandi et al), their nemesis Scialoja and the beautiful Patrizia).

That's it for my 'best of' list. We're back at work next week for the penultimate Aubitt Studio recording sessions for English Electric. If I get chance, I'll do some updates from the studio on our Facebook group page. In the meantime, I'd like to wish you all a Merry Christmas.