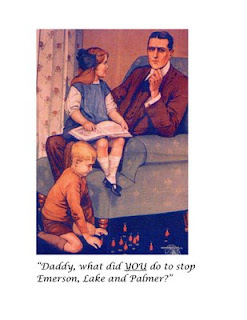 The Progressive Rock Hall of Infamy site is an interesting new blog.

Whatever your opinions on the content of the blog, it's certainly written in a combative style.

Here is an excerpt from PRHOI. It's an attack on Yes which sidesteps the obvious targets and takes a swipe at Relayer, Going For the One and Tormato (best not to read any further if you like everything Yes have done):

'Over the years, thinking more and more about the time lost to Rick Wakeman’s keyboard peregrinations and Anderson’s sheep-being-slaughtered vocal excesses, I came to despise Yes, blaming them for ruining Prog and making an already bleak and sorrowful world an even darker place with the truly wretched excess of their output. There have been many things said about Yes, and if I wanted to, I could keep the PRHOI in business for the next five years just publishing reviews of Yes albums proper, various side-projects and the myriad groups they somehow inspired to make similarly indulgent and pointless music. I’m going to pass on that option, as I’m forbiddingly depressed enough already to ever survive writing my thoughts on Tales from Topographic Oceans or Wakeman’s own Journey to the Center of the Earth madness. Instead, I’m going to deal with three of the albums that Yes released over a roughly 40 month span in the mid to late 70’s, albums that signaled a band in decline and yet simultaneously at the height of their powers. For as they died, like a great god or king, they resolved to take everyone down with them, and the results of this infernal pact with the Lords of Suck were Relayer, Going for the One, and Tormato – the last perhaps the worst and most ridiculous title ever bestowed on any album, crap or classic, Prog or mainstream. Look at that goddamn album cover, look at it – and tell me your liberal heart still yearns to abolish capital punishment for a crime against aesthetics so vile and miserable. Shark Sandwich was made up, but these motherfuckers were coming from the heart.'


'The incomprehensible – and in my view inexcusable – long-term popularity of Yes is largely due to a phenomenon I have observed in other culturally-challenged sub groupings of society – prison Nazis, collectors of Thomas Kinkade paintings, people with a lot of Pottery Barn flatware in their kitchens. The problem is one of mistaking all similar product with being of similar quality; i.e., if I like King Crimson, it is only natural that I would have a yen for Yes. If I drink beer, then Budweiser or Kokanee will be fine if Pilsner is too expensive. If mushrooms make for a good trip, perhaps I’ll try huffing nail polish remover. The point is, none of these quasi-syllogisms ring true, and are in fact dangerous misjudgments that help define the culture whore as opposed to the truly cultured.'

I happen to think that Going For the One is one of the greatest of all prog albums, but I have some sympathy for the PRHOI position on Relayer (excluding the lovely 'Soon' section, of course)...

'Relayer was in the spirit of earlier Yes efforts, meaning that the record starts with a 21:55 second “song” that is about as focused as a drunk’s urine stream and hops from notion to notion (none of the elements could be properly called “ideas”) like a third-grader who forgot to take his Ritalin. Sadly, as Steve Howe’s guitar work is often dynamic – there is even what appears to be a little nod to Jimmy Page’s brilliantly messy solo from “Heartbreaker” on “Sound Chaser” – the music is controlled by the interruptions of Alan White’s overly noisy drums and the unusually aggressive vocal stylings of Anderson. Indeed, what identifies Relayer the most to me is its sheer noisiness – new member Patrick Moraz, having replaced the grandiose stylings of Rick Wakeman on keyboards, is given little chance to do other than offer fills to violent bursts of cacophony and the ever-present threat of Anderson’s bleating; allowed to calm these tracks down a little, Moraz might have proved valuable. As it is, he’s lost in a mix overrun mad with ego'

Tormato, however, gets the full broadside:

'Finally, the triumvirate collapses utterly on Tormato, an album so worthless that I almost feel bad for the kind of band that would produce such drek. Not a lot can be said about the banality of this waste, so why not just consider the song titles and tell me that you have any desire to actually listen to the fucking thing: “Don’t Kill the Whale”, “Arriving UFO” and “On the Silent Wings of Freedom” – the last very probably the worst song on any of the three disastrous albums in question'

It's worth reading the whole post at the Hall where a number of other bands and sub-genres are targeted in similar fashion.
Posted by Gregory Spawton at 11:25 am

Yes well, it seems that you either like Genesis or you like Yes, and you seem to be coming down squarely in favour of Genesis. I would argue that Yes are vastly preferable - to my ears, anyway. I've tried Genesis many times but have never really managed to get into them. True, Yes's albums have been variable, but there is not one that I cannot listen to with pleasure. I think you're being rather harsh about Tormato, which has some wonderful moments - including "On the silent wings of freedom" and, yes, the much derided "Don't kill the whale".

I'm a fan of both, although not equally. However, the (unintentional) juxtaposition of the two posts on Yes and Genesis does make it seem like I'm comparing one to the other.

For the most part, I don't agree with the Hall of Infamy bloggers on Yes; for me they are one of the outstanding prog bands.

Genesis have always been my favourite of the two, BUT, I think Awaken and Turn of the Century are equal to anything Genesis has ever done. And whilst Tormato has its problems, it also has some great music on it. Relayer is disappointing, though; it could have been a great album but doesn't reach the heights.

Yes really did scrape the barrel with Union and Talk, but then Genesis got there first with Invisible Touch.

I really love that we all love this music but totally disagree on what is great about it.

If I was asked I couldn't really choose between Yes or Genesis. Yes made a greater number of good albums and didn't loose their way as severely as Genesis did in the 80's and 90's.

While I'd agree Tomato is poor (in comparison with most of the early stuff), Relayer is one of my all time favourite Yes albums. The really great thing about Relayer is the sound was slightly out side what become the standard prog formula and I think it has aged much better for that reason.

Hall of Infamy haven't tried to find anything positive in either release. I hate those sort of reviews, they tell the reader little about the album and do the band no favours. Still, Yes are big enough to take it, and popular enough to have proven them wrong. It's obviously written to be provocative.