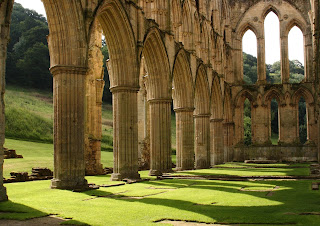 A few years back we visited the North Yorkshire Moors. We stayed for a few days at an English Heritage cottage within the grounds of an abbey at Rievaulx. I'd seen pictures of the romantic ruins of this abbey throughout my childhood and had always wanted to spend some time there. The cottage allowed us access to the site after hours and so were able to see the ruins in their splendid isolation when all the visitors had gone. At night the abbey becomes a very eerie place which meant a ghost-hunting trip was in order and, of course, we spooked ourselves very badly (there were dark shadows and ravens that refused to sing.)

On our first day at Rievaulx I noticed a man tending to the stones. He was there throughout our stay and worked from dawn until dusk. He was an interesting-looking chap, lean and tall with a square-jaw and a face that had been exposed to the elements over the years. He reminded me a little of Ted Hughes or, in my imagination, Heathcliff.

I became fascinated by this keeper of the abbey and plucked up the courage to say hello. I expected him to be a typically taciturn Yorkshireman but, in fact, he was happy to talk and so I got to know a little bit about his story. He came down from the moors to the valley every day. He loved the abbey and wanted to make it beautiful so he worked hard throughout the hours of daylight. There was, however, an air of melancholy about him which I couldn't put my finger on. At one point he said he had really wanted to travel the world but had never managed to escape.

I walked back to the cottage and made some notes about the keeper of abbeys and later, from those notes, wrote the words that became the lyrics to the fifth song on English Electric Part Two. I have, of course, used some artistic license in painting a portrait of this character (in particular I imagined a reason for his melancholy state) but the song is for the most part a reflection of the man I met at Rievaulx. 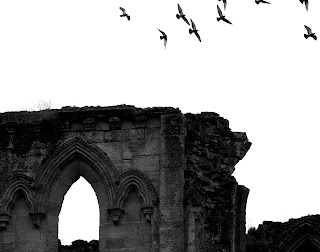 Posted by Gregory Spawton at 2:35 pm

Great story. I remember you telling me about the holiday. We'd stayed at Bolton Abbey that same year but not in the grounds and I came away with a tea towel not a set of lyrics... but other than that...

What a truly beautiful story and that song title is just so thought-evoking... I'm sure I will love this song... :)

My family an I just visited the Abbey specifically because it was used in this song. We were on vacation from the USA. I was hoping to meet the Keeper, but could only talk to the shop keepers. They had no idea that this song existed for 'their' abbey. We had a great chat and they were excited to research the group and song.