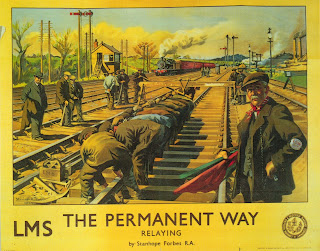 'The permanent way' is a Victorian expression which means the finished track and bed of a railway. I am sure it was intended to be a utilitarian term but it's a phrase which is full of mystery and hidden meaning. 'Way' is an Old English word meaning "road, path or course of travel". 'The permanent way' seems to suggest a longstanding connection between the countryside and the people who work on the land linked by the ancient (and new) pathways running through the landscape.

English Electric is not a concept album but many of the songs are thematic. On The Permanent Way, which is the penultimate track on the album, we have brought together the stories of the individuals and communities working on and under the land who, along with inescapable geological forces, helped to forge the British landscape.

'Working the way through the valleys and fields,
grass grown hills and stone.
Parting the land
with the mark of man,
the permanent way.
Using just available light,
he could still see far skies,
deep time.'

Where people have helped to shape the landscape it is at the hands of ordinary folk that this has been done. Sometimes this has been at the behest of powerful land-owners and at other times it has been due to the vision of those far-sighted men-of-iron. But in the end it all comes down to ordinary men and women, in communities past and present, working on the land.
Posted by Gregory Spawton at 4:16 pm

Our wheels and our feet run on and are borne by the bones of our ordinary ancestors.

This is the absolute killertrack!
When the Hedgerow reprise starts I'm completely blown away. And then the finale with the violin/guitar combination: brillant!
I deeply admire people who are able to do such compositions. Best track for me for a very very long time. Chapeau!

Unbelievable album and track. Some of the finest pro I have heard in 37 years of listening to almost exclusively prog. BBT is turning out impressive and important works that will take their rightful place in prog history. First rate compositions and musicianship. One question: what poem by Sir John Betjeman is being quoted in The Permanent Way?